We found out, that chords basically consist of a root note, the 3rd and the 5th of this root note. A major 3rd for major chords and a minor 3rd for minor chords.

And I pointed out, that no matter how you arrange any notes of any triad, it will still be that specific triad.

But that is simply definition and probably not very interesting for you. That is why I will show you now, how you are already, unconsciously, applying inversions.

Let us play a C major chord in root position, and exactly in this order:

Play them consecutively from bottom to top and remember how it sounds.

Play the notes consecutively and try to memorize the sound of this.

The 2nd inversion can be found while playing two open strings: The G and the high e-String, with the last missing note for a complete triad on the 1st fret of the B string. You are playing G C E.

Now play all those three shapes and notice how different they can sound, even though they are basically the same chord!

But this is not even the way, that you are using them without being aware of that.

Look at this chord diagram: 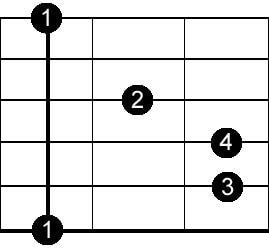 Up to this point, we only played C and G notes, so basically a genderless power chord. But now it is becoming interesting.

The next note on the G string in the 9th fret is an E Note, which is the 3rd in the C major triad. So, with the two previous notes, we get: G, C and E. And that is…?

That gives us the notes E G C and that is the 1st inversion of the C major chord.

Here is another little exercise for you.

Get clear on what notes are in the A minor triad. Find all 3 shapes for A minor on the G-, B- and high e-String, so all inversions of A minor and listen to the characteristic sound of each inversion.
​
Next, this is the Minor shape for barre chords: 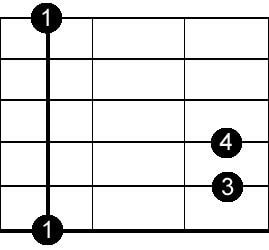 Now find and play the different inversions that this shape contains like we did above with the C major chord.
THEN: do the same for a few other chords in the key and after that change to other keys to get a full understanding of how chords are constructed.

Michael Korte is teaching guitar in Finland. In his guitar school, he teaches his students new approaches and concepts for their rhythm and solo playing and also shows them how to improve their practicing, so that they get better results faster. If you want to reach the next level in your playing and you are looking for a guitar teacher in Tampere make sure to get in touch with him.